Today I did " The Bat " and decided to compare it with the last “Bat” workout on the 31st August hoping to see some improvement in fitness in around 12 weeks. Today I increased the intensity overall by 3% as I hadn’t done a fitness test for a while and wanted to push myself. This was tough but I finished using the new settings and keeping in ERG mode so I couldn’t cheat. To my surprise and disappointment all the results were down on the 31st August even after rigorous training and sticking to the plans. Here is the data for those who I haven’t bored to death yet.

How can I add 3% to a workout whilst sticking to the uprated power targets yet have lower power figures overall. Very demoralising after 12 weeks of meticulous training!!! BTW the trainer is calibrated correctly.

What trainer are you using?

The only bit about this that concerns me is that the targets were higher today, but the output was higher previously.
Assuming you use a wheel off smart trainer, have you changed the gear that you use to drive the trainer?
You’ll notice that the longer sections of effort are closer while the shorter are more separated, which suggests a possible power control issue.

Altogether, though, the number differences fall into insignificant for the most part.
It’s very difficult to accurately just judge two sessions against each other. Different air temperatures, different levels of restedness, different behaviours during the day and time of training, different food intake. There’s loads of reasons for different performance levels on a given day.

It is definitely odd that you managed higher power outputs on lower power targets previously, but the longer run sessions aren’t miles out.
You also can’t judge “fitness” based on this anyway, do you have HR measurements? Because if your HR today was significantly lower for similar effort levels then that would indicate improved fitness.
The numbers provided say nothing as to that end…

Hi thanks for your reply… the trainer is an Elite Direto. I have attached a screenshot of the “progress??” page. The very first workout at the bottom in May was when I first joined SYSTM and my figures were an estimate, the others are based on my last 4DP test. 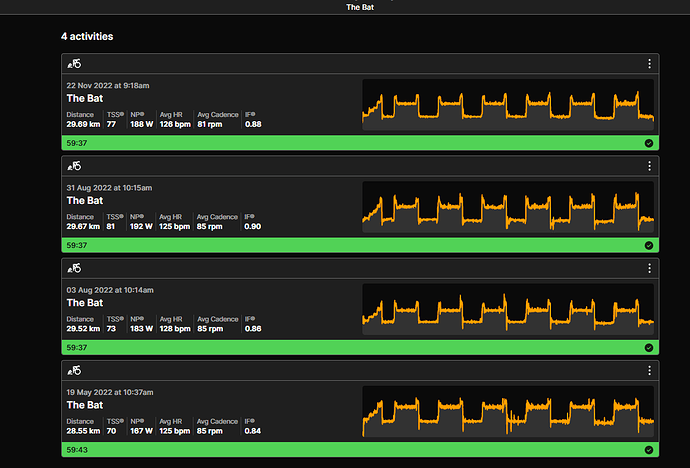 There are a few, little, things to pick out of there.

First, your cadence on the latest session was notably lower than the previous sessions, which may have some bearing on that trainer’s output.
The TSS and IF values sit where you’d expect for the recorded effort levels too.
Nothing looks horribly wrong.

The other thing of note, though, would be the trainer itself.
I’ve never had one, but I know there were a number of reports of Elite Diretos having inconsistent power readings.
Just a very quick Google provides a lot of records, one such example in a fairly extended thread: Direto power off by around 50 watts - Page 4 - Official Forum

For me, though, the key take-away would be that the results sit roughly within error values, there are a lot of reasons for changes in performance from day to day and I wouldn’t necessarily recommend looking for performance changes too often. If you want to measure the improvement in your performance, that is far better done with a retest (4DP) than by comparing rides like above.

Thanks, just had a look at that thread, interesting! Mine is the later Direto with a supposed power accuracy of ±1.5% and GP lama and DC Rainmaker regard them as pretty accurate and they are thorough. Just what concerned me the most was that pushing the higher power figures and I was hitting the slightly inflated targets, regardless of the trainer accuracy, cadence etc resulted in lower overall figures. SYSTM can only work out all the metrics on what the trainer is giving them, accurate or not?? thanks for your input on this

Wasn’t sure at first but checked back and here are the profiles, just for he interval sections.

Interestingly, the recovery target was the same on both, maybe such a small increase makes no difference at such a low wattage. I will get over it!! just a bit disillusioned after 12 weeks of suffering. I have a Half Monty coming up in a few weeks and I am going to HAMMER that now just to make myself feel better.

Just had another look by scanning across each effort in my progress chart and comparing the two dates. The power for the middle parts of each effort is way higher than the target and higher than the middle target in the latest workout. All I can presume is that the previous workout was done in level mode?? Can’t remember doing that as i only normally use level mode when there are rapid power changes and normally I make a note in the edit section of any changes I make. That would account for most of the discrepancies I reckon. If so, must have been feeling pretty strong on that day??

Is there any chance that you hiked up the targets back in August? The workout history will tell you the prevailing 4dp profilw, but not if you added some percentage points to the targets.

Don’t stress about it, @ozmadman. You’re riding consistently - that will produce results. A one-off ride is not a true measure of progress.

(with proper recovery and lead up).

Just did one myslef and am really happy with improvents since starting Systm 5 months ago. Not fun, but it’s mostly in your head (also your legs, lungs, core etc).

Even if the Direto power is out, unless you have a different power source, the trainer won’t “know” it’s out. It will think it’s doing 250w (or whatever) regardless. At the bottom of your workout summary fit says the 4DP profile used. How do those compare? I would presume you must have tested between August and today to get a different power profile.

Hi all those workouts apart from the first one are using the same profile. Have a half Monty coming up on my TT plan in a couple of weeks

Blockquote You’re riding consistently - that will produce results. A one-off ride is not a true measure of progress.

Blockquote
Thanks for that! I too did a Half Monty recently as scheduled in my plan and was a little frustrated that my MAP had apparently dropped by 10%, (while the other metrics had increased slightly). I tell myself that my utter failure during the Map ramp-up was caused by my weak mind and not by my miserable physical performance…

More than likely you “over reached” on your latest ride and did not hit all of your power targets. Your cadence was much lower on your 2nd ride and I’m assuming you did not hit your target TSS for the ride as well. This happened to me when i had my FTP and AC set too high. I would not meet the expected TSS for the ride, and my cadence was much lower than what I was supposed to be spinning (example: the cadence was supposed to be 100 and I was only between 60-80 for some intervals). Once lowered my TSS in my profile, I started to hit the exact expected TSS for each ride.

All of these are based on the same FTP after my 4DP test. 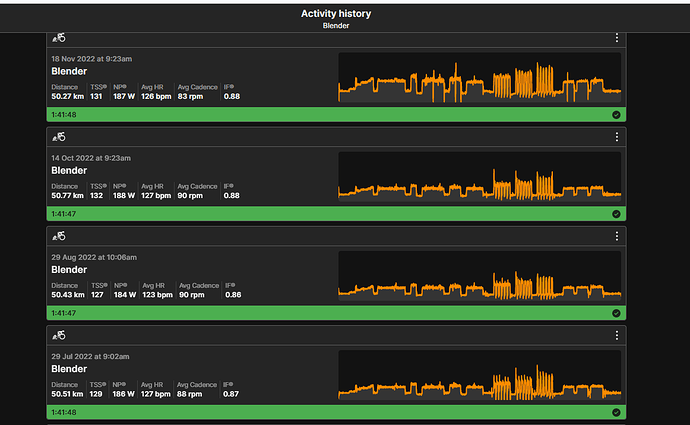 You missing his point, all may be based off the same FTP values but the session you are querying is the one you raised by 3% intensity (OP).

He over reached when he rode at the incresed intensity. Similar findings when you compare his and your sessions riding at 1005 and riing at an increased intensity.

Yes I probably did overreach by adding 5% which caused me to fatigue halfway through but as I mentioned earlier, the 4 minute parts of each interval were done at a higher intensity in the previous workout than the latest one. All I can think of is that I must have done that workout in level mode for some reason but that’s not normal for me to do that unless there are rapid power changes. So even though I bumped up the effort by 5% which caused me to overreach and fatigue that resulted in a worse outcome

You also look like you ‘jumped’ into some of the pain shakes on previous efforts causing a spike over the target. This will upwardly affect the NP even if the power settles to target afterwards and so might cause some of the difference you’re seeing.