What kind of fan do you use?

I’ve been using two fairly pedestrian fans for the last several years and I’m quite excited to invest in a high-powered fan for maximum cooling and space savings. I’m looking at buying a Lasko Pro Performance fan like this one: https://www.amazon.ca/dp/B077BMBR5B

Before I pull the trigger, what other Sufferlandrian-quality fans do people here use for cooling off during indoor training sessions?

PS: I’d really, really love a Wahoo Headwind, but it’s a little too pricey for my taste.

I use a bog standard 3 speed 20" box fan. The key is to get is a close to your body as possible. Put it on a box or stand in front of you as high is it will go without blocking your view of the screen. This setup works really well for me.

I also use a regular fan and it works well.

I’ve heard the Wahoo Headwind wrks really well, but I guess you don’t miss what you haven’t tried. Is it really worth the money?

I read that when you ride outdoors you get about an order of magnitude more airflow than from household fans. My sopping wet kit is testament to not having enough air.

I use the Lasko fan (used to be Stanley). It’s powerful and fairly quiet. No, it doesn’t adjust to your speed or HR, but for the price it’s a good fan. The only real negative is that it’s directed to a fairly narrow range. You can adjust it to go lower and higher and obviously move the fan to be based anywhere you want, but once it’s set it’s not moving.

I don’t use a fan. Maybe I should try it just to see what kind of difference it really makes.

For reference, my cave temperature ranges from -4c in the winter to +22c in the summer. The biggest issue I have, however, is not the absolute temperature but the lack of air movement, thus indicating that I should probably at least try using a fan on a tough workout and compare how I feel with/without.

I have 2 monster fans and a portable AC unit! I have never overheated during a workout, even in the summer!

A portable AC unit is very good because it actually cools the room down. I’d like AC installed but here in the UK it’s expensive. The AC unit I have is a proper AC unit, not just an air cooler.

It is very seldom I use a fan, I am waiting for the smart fan that adjusts trainer resistance like a real headwind

+1 for the Screwfix one (for UK folks). I do find that mine tends to have a fairly big ‘dead spot’ in the middle though. Just a matter of making sure that it’s pointed properly.

I’ve used a regular oscillating fan with a big floor fan from Screwfix and found them ok in general but not enough on hot days. I bought one of these: https://www.cleva-uk.com/products/vacmaster-air-mover which is very similar to the Lasko fan and does a better job than the other two, but still isn’t really enough for me. Once I get power into my garage I’ll probably use the Cleva air mover and the Screwfix fan together, but might have to look for a portable AC unit… I tend to run very hot, then suffer from exertion headaches afterwards so still trying to find the best solution.

The only issue with a portable AC is that it needs a window to remove the hot air. I use an extension hose because the original one wasn’t long enough to reach my window. It’s unsightly but the room is used solely for suffering so I don’t care. They are much better than fans. Always get a model with a BTU rating more than they suggest for the room size because of what you’re doing in the room! I think mine is 12000 BTU which is designed for rooms a fair bit bigger than my bike room.

Great article to describe the problem. Thanks.

How Much Fan Do You Need When Riding Indoors?

You need to move air. The question is, how much?

I appreciate all the replies so far! I thought I’d summarize where I’m at so far in my research and what I’ve learned so far, in case it can be helpful for others.

Fans can make or break your training, especially when you’re “going deep” on an intense workout. In my case, this has become an obsession leading into my Knighthood attempt coming up in mid-August. I want to stay as cool as I can through my 10 SUF workouts!

It seems the Lasko high power fan I was considering (mentioned in my original post) is quite highly regarded by many indoor cyclists, but it doesn’t seem to actually push that much CFM (cubic feet per minute). It’s in the mid-300 CFM but from what I’ve read, it puts out a much more focused wind “beam”.

Other popular options seem to be the high-power 20” floor fans that push very high CFM, but with a less focused wind pattern.

Air conditioning units seem like a good idea if you’re not already in an air conditioned space.

The other consideration is decibels…65-70 dB is what you’d expect to have as ambient noise in a car at ~100 km/h, so when I see a fan putting out 5100 CFM at 65 dB, I’m happy. I can live with that. Related to this is that I often wear my noise cancelling headphones now to remove the noise from the fans. It’s been a game changer and I love them.

Finally, some fans come with a remote control, but most don’t so many people plug their fan into a wifi power strip. Personally, I’ve just used a more old school method for some time now (and will probably continue to do so because it works well) by plugging my fans into a power bar plugged into another plug that can be controlled wirelessly with a remote. We bought it a long time ago for Xmas tree lights but it’s now used only for indoor cycling.

So in the end, I’m going to get a floor unit like the 20” Honeywell floor unit mentioned by @spoons52 (but not exactly as I’m not in the UK). It puts out 5100 CFM at 65 dB and it’s about 2/3 of the price of the Lasko option I had been considering and 1/2 the price of the comparable Lasko 20” floor model.

So in the end, this is the unit I’m buying … it’s from a Canadian retailer, but I’m sure these exist just about anywhere under different brands if you look. https://www.canadiantire.ca/en/pdp/mastercraft-floor-fan-20-in-0437331p.html

JF,
That fan will work. I use an 18" Vie Air, now. I had a similar setup like you with a box fan and another round directional fan. All I use is the 18", in front of me at about the top of the wheel height. I place it there to pull up the cool air and honestly it gives it a bit of a road ride feel. Full disclosure the house has central AC and the vent is right above my head

We live in the States and got the Vie Air at a much better price, $48. It is still worth the higher price: https://www.amazon.ca/Vie-Air-Industrial-Powerful-Quiet/dp/B01LVTMXN1/ref=sr_1_2?dchild=1&keywords=vie+air+fan+18+inch&qid=1596203180&s=kitchen&sr=1-2
And it pulls double duty around the house when we need more airflow i.e. the kitchen when we’re doing a big cook.

You are hitting a key component for your Quest. I was using only a box fan during my Quest. It was March so the AC wasn’t on, by the time the wife checked on me the old pain cave was a comfy 90F. Needless to say, I was heading down the old dehydration road. I fought back and with the AC on continued to SUFFER ANGONIASSLY!

Good Luck on the Quest…think of fresh Poutine

Good feedback for my Knighthood attempt … we also have AC, but I’ve noticed that I can heat up the gym with a longer ride. After 10 workouts, the fan will be essential to keep the temp down and my hydration levels optimal and safe.

i got a floor model at Lowe’s. 3 speeds, pushes a good amount of air, was relatively inexpensive 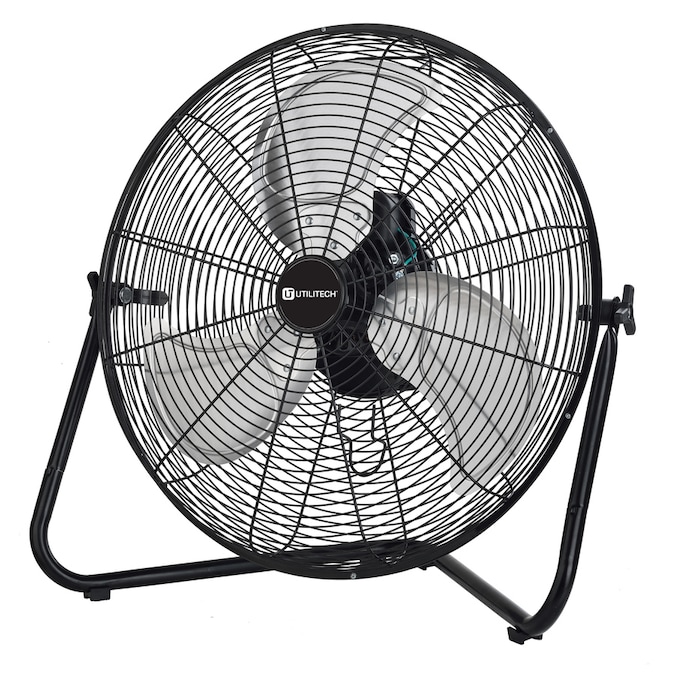 Just had a look, the large fans I have push just over 4750sqft/min. The AC unit is less (I’m not sure on that exactly) but obviously it blows very cold air out. Suspect I have about 11-12000sqft/min lol